Schubert to Shaw with the Eno String Quartet 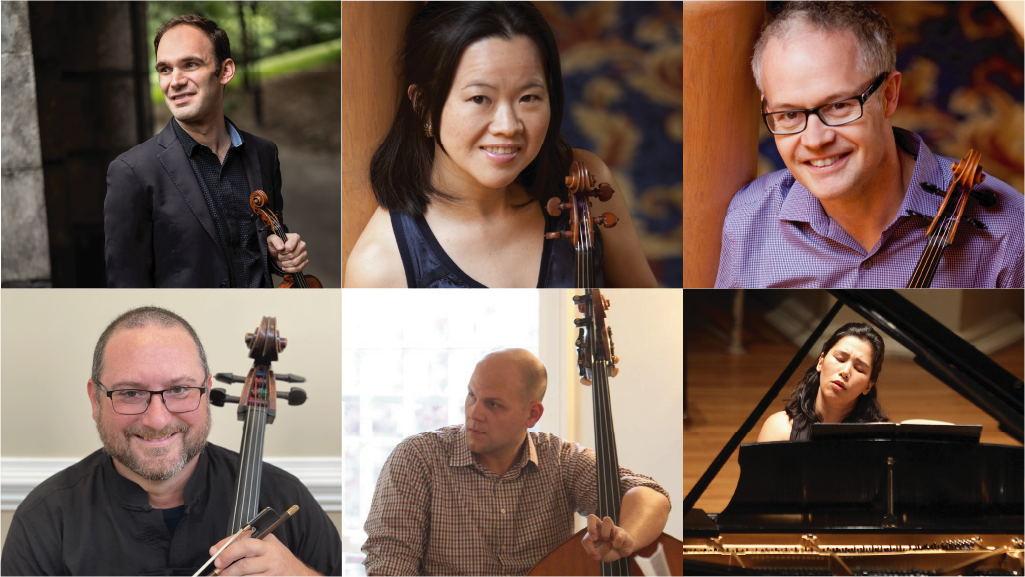 Quintet in A major for Piano and Strings, D.667, Trout, by Franz Schubert

American pianist Mimi Solomon enjoys a multi-faceted career as a chamber musician, soloist, and teacher. She has performed throughout the United States, China, Japan and Europe, has appeared as soloist with orchestras including Shanghai Symphony, Philharmonia Virtuosi, and Yale Symphony Orchestra, and has been featured on numerous radio and television broadcasts including the McGraw-Hill Young Artist’s Showcase, France 3, France Inter, and National Public Radio.

Mimi is also an enthusiastic and dedicated pedagogue: she is co-artistic director of MYCO Youth Chamber Orchestra, she spends part of every year coaching and performing chamber music at Kinhaven Festival in Vermont, and she has taught at Cornell University, East Carolina University, and Ithaca College.  She is currently on the faculty of the University of North Carolina at Chapel Hill.

Praised for the “rapturous poetry” in his playing (American Record Guide) and as an “excellent” and “evocative” violinist (New York Times), Nicholas DiEugenio leads a versatile performing life as a chamber musician, leader, and soloist in music ranging from early baroque to current commissions. He performs in venues such as Glinka Hall in St. Petersburg, Trinity Wall St., Freiburg’s Ensemblehaus, and Weill Recital Hall. Together with pianist and duo partner Mimi Solomon, Nicholas created the project “Unraveling Beethoven,” a cycle of all ten violin sonatas combined with response works from composers Tonia Ko, Jesse Jones, Robert Honstein, D.K. Garner, and Allen Anderson. The award-winning album "Unraveling Beethoven" was released in 2018 by New Focus Recordings. Other featured recordings include the complete Violin Sonatas of Robert Schumann (Musica Omnia) as well as a tribute to Pulitzer prizewinner Steven Stucky (New Focus). Nicholas is a core member of The Sebastians as well as Associate Professor of Music at UNC Chapel Hill.

Nonoko Okada is currently a violin instructor at Duke University String School in Durham. She regularly performs with both the North Carolina Symphony and Charlotte Symphony. She received Bachelor's degree in violin performance from the Mannes College of Music and later received her Master's degree from the Juilliard School. Nonoko enjoys cooking, knitting, running and spending time with her family. She lives in Chapel Hill with her husband Simon Ertz, who is a violist, and her two children Yuna (11) and Aki (9).

Simon Ertz is principal viola of the Winston Salem Symphony, North Carolina Opera and plays as a regular substitute in both the Charlotte and North Carolina Symphonies. He has appeared as soloist with the Winston Salem Symphony and regularly performs on the Greensboro Symphony Chamber Music Series. After graduating from the Royal Northern College of Music Simon worked with orchestras accross the UK including the BBC Philharmonic, BBC Scottish Symphony, the Royal Liverpool Philharmonic and the Northern Chamber Orchestra. As a member of the Degas Quartet from 2002 until 2010, Simon has performed in venues across the country including appearing as guest artists at the Aspen Music Festival, the Chicago Chamber Music Society and at the Library of Congress where he performed on the Tuscan Medici Stradivarius. Since moving to North Carolina, Simon completed a Doctoral of Musical Arts at the University of North Carolina in Greensboro and now teaches at Duke University and University of North Carolina. He plays a viola made by his brother, Neil Ertz